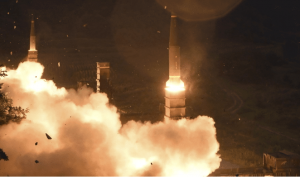 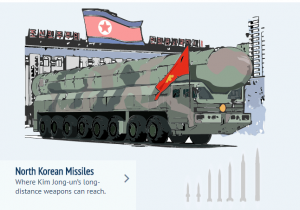 North Korea Heating up and threatening Trump. Things are heating up for sure.Our government has finally had it.  Zero hedge just reported that Pentagon Unveils Plans for “Pre-Emptive Strike” On North Korea.The attack would consist of B-1 Lancer heavy bombers located on Andersen Air Force Base in Guam, a senior acting and retired military officials told NBC news.

“Of all the military options … [President Donald Trump] could consider, this would be one of the two or three that would at least have the possibility of not escalating the situation,” retired Admiral James Stavridis, former Supreme Allied Commander Europe and an NBC News analyst, said. North Korea heating up for sure!!!

The North Koreans can now making miniaturized warheads that can fit on their missiles. These can be easily sent to the US coast. The Washington Post reports Aug 8 2017

Check out what we are doing to prepare the South Koreans against the North Korean threat. So Tuesday we decided to arm the South Koreans with more powerful missiles. PUBLISHED : Tuesday, 08 August, 2017, 2:24am

The rest of the world is trying to take less forceful measures, but firm and can be debilitating for the North Korean Economy. “The UN Security Council unanimously imposed new sanctions on North Korea on Saturday aimed at pressuring Pyongyang to end its nuclear programme. The sanctions could further choke North Korea’s struggling economy by slashing its US$3 billion annual export revenue by a third.”

There is a lot going on. Some thing it is just Trump Rhetoric and others fear something like a Cuban missile crisis. Either way if you back a dog into a corner, he will do something to protect himself. Whether that is EMP weapon or general strike toward our mainland, we don’t know.

At Portable Solar, we want you to be prepared. You don’t have to get the Sol-Ark EMP hardened generator, but please unplug at least any extra appliances so they won’t get killed. They do not need to be in a metal box, just unplug from the electrical grid for now. We will keep you posted as developments are released to the news. Pray for our country.