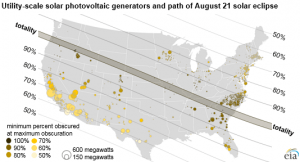 On August 21, a solar eclipse will obscure the sunlight needed to generate electricity at approximately 1,900 utility-scale solar PV power plants in the U.S. However, relatively little solar PV capacity lies in the path of totality—where the sun will be completely obscured by the moon—and the North American Electric Reliability Corporation (NERC) does not anticipate the eclipse will create reliability issues for the bulk power system.

Solar Powered generators centered in the path of totality will be affected the most, as the moon will block all direct sunlight for up to three minutes. These generators will also be affected to a lesser extent throughout the entire eclipse event, which will last for up to three hours, measured from the onset to the ending of any blockage of direct sunlight. Generators outside of the path of totality will be less affected, depending on how much sunlight is obscured. The path of totality spans the U.S., starting in Oregon and moving eastward to South Carolina over the course of approximately 90 minutes.